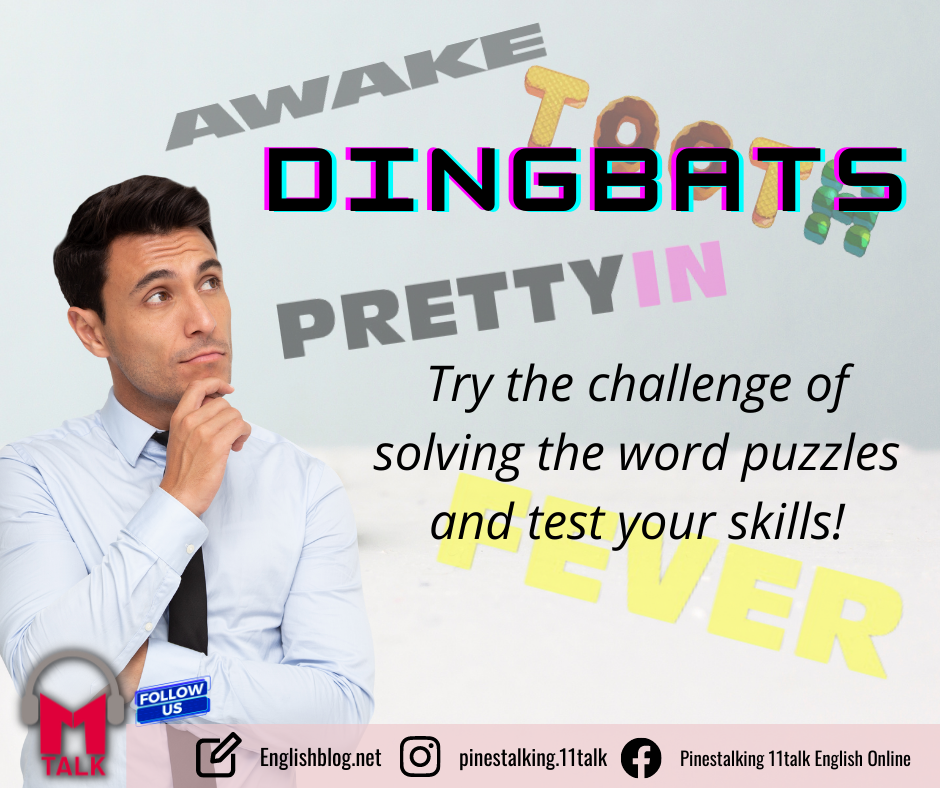 Games are fun! Some of the most popular word games are the Scrabble and the Word Factory. However, there is a word puzzle game that is not really that popular. To those who are not familiar with the game, dingbats are visual word puzzles from which a well-known phrase or saying has to be identified. They are derived from the board game that was devised by Paul Sellars.

Here are ten dingbats you can answer. Let us see how many you can get.

Meaning: someone or something that is bad and causes all the problems in a situation.

Sample Sentence: I get tired of being portrayed as the big bad wolf.

Pierre: Have you heard?

Pierre: Eli is joining our team.

Zeus: I see but what about him?

Meaning: it is often better to remain silent than to speak.

Charlie: Alexander and Shawn just had an argument.

David: Again?! What is it all about this time?

Charlie: About politics. You know that they have been very vocal about their political stand.

David: I know. When will one of them learn to back off and learn that sometimes, silence is golden?

ANSWER: Short End of the Stick

Sample Sentence: She got the short end of the stick in the deal.

Mary: Tom is one rebellious kid.

Jack: I know but I guess he’s doing that because of his parents.

Mary: What do you mean?

Jack: Well, he’s always getting the short end of the stick.

Mary: You mean; his parents are taking favorites?

Jack: Kind of, they pay more attention to his twin brother.

ANSWER: Drop in the Ocean

Meaning: an amount that is so small that it does not make an important difference or have much effect.

Sample Sentence: My letter of protest was just a drop in the ocean.

Deyanne: We need to gain more signatures for this campaign.

Xian: How many signatures are you collecting?

Deyanne: At least, a thousand.

Xian: And how many signed the campaign?

Deyanne: Ten, and it’s just a drop in the ocean.

Xian: Oh, why don’t we ask Perry to join us? He’s a celebrity after all. I’m sure he could convince people to sign the campaign.

ANSWER: An eye for an eye

Meaning: the idea that a person who causes another person to suffer should suffer an equal amount.

Sample Sentence: I don’t believe in that kind of eye for an eye justice.

Mark: What is it this time?

John: I’m not so sure. You know those two, they like competing with each other.

Mark: Geez, this principle of an eye for an eye makes the whole world blind.

ANSWER: Pie in the sky

Meaning: something that you hope will happen but is very unlikely to happen.

Sample Sentence: Their plans to set up their own business are just pie in the sky.

Alj: It seems like she’s not really interested in me. Us being a couple is a pie in the sky.

JC: Are you kidding? Didn’t you notice the way she looks at you?

Alj: What about it?

Meaning: to deceive someone by working only for your own advantage in the (usually illegal) activities you have planned together.

Sample Sentence: The diamond thief double-crossed his partners and gave them only worthless fake jewels.

Clara: Have you heard the latest tea?

Almera: I’m not so sure. What’s it all about?

Almera: Oh, I think I know. John is helping Rick to get him closer to Susan. Right?

ANSWER: Too Little to Late

Meaning: not enough of something that should have been provided earlier:

Sample Sentence: A spokeswoman described the aid for the refugees as too little, too late.

Clara: Have you heard the latest tea?

Almera: I’m not so sure. What’s it all about?

Almera: Oh, I think I know. John is helping Rick to get him closer to Susan. Right?

Sample Sentence: you don’t need a green thumb to grow them.

Franchesca: Can we go to the Plant sales outlet?

Juancho: Sure. What are you going to buy there?
Franchesca: Probably some pots and seeds to grow.

Juancho: I didn’t know you like taking care of plants.

Franchesca: Oh, no. I’ll get them for my Mom. She’s the one who has a green thumb.

Meaning: to not do what one said one would definitely do.

Sample Sentence: Jon has broken his promise to bring his girlfriend to Disneyland this weekend.

Patty: Why are you sulking there?

Mona: Oh, It’s because of Lucas.

Patty: What about him?

Mona: He told me we’ll go to the amusement park tomorrow but he has called me and told me he can’t go. Broken promises are the worst!

Patty: You don’t need him to go. Pack your things. I’ll call the girls.