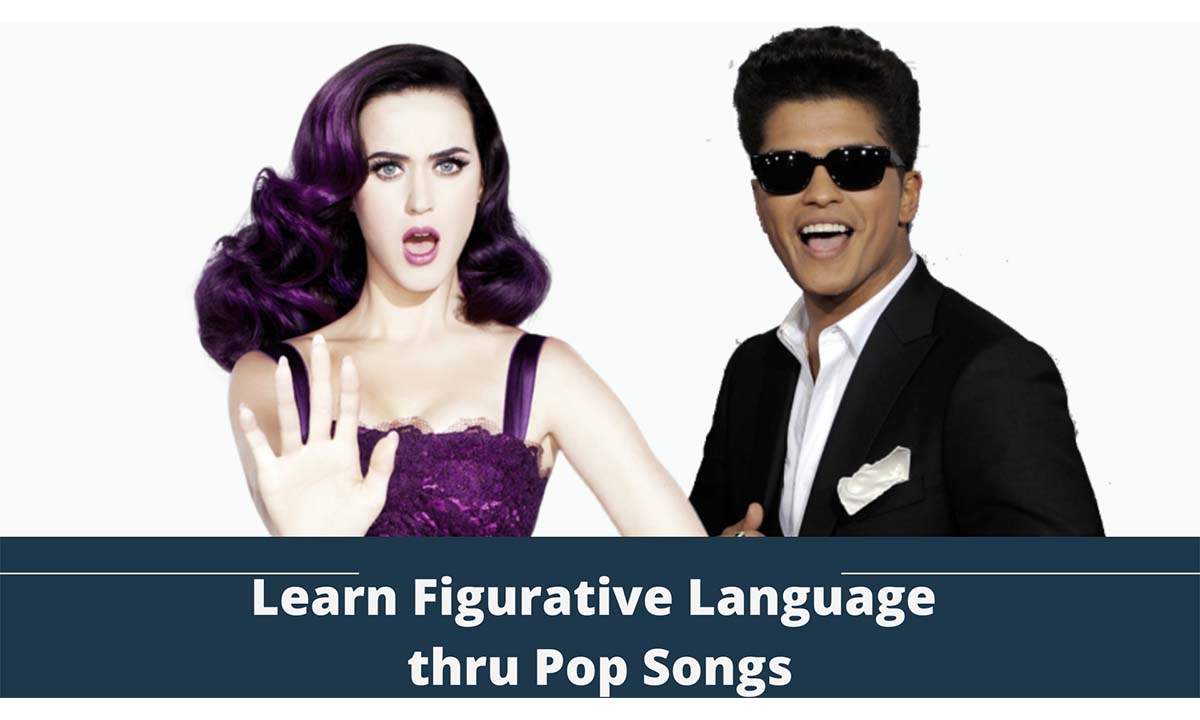 Figurative language is a language that communicates ideas beyond the literal meaning of the words used. We use this to create an image or other effect in the mind of a reader or listener. If you want to become a charismatic and gracious speaker or even writer, try using figurative language.

There are many kinds of figurative languages. In this lesson, we’re going to learn some of them. And to make it more interesting, we’ll study them by using lyrics from famous songs.

[It means he is working hard, as bees are known to be extremely busy.]

b. You’re like cats and dogs.[ It means they usually fight or argue like dogs and cats that are known to hate each other.]

To see more examples of simile, let’s take a look at this song.

Drifting through the wind, wanting to start again?

Do you ever feel, feel so paper thin

Like a house of cards, one blow from cavin’ in?

Do you ever feel already buried deep?

Six feet under screams, but no one seems to hear a thing

Do you know that there’s still a chance for you?

‘Cause there’s a spark in you

2.  METAPHOR-A comparison of two, unlike things that suggests a similarity between the two items. Unlike similes, it doesn’t use the words “like” or “as”. It creates direct comparison without using either of these words.

a. Time is a thief. [Time seems to pass quickly without us noticing it.]

b. Her heart is gold. [She is very kind and generous.]

LONESTAR sings a song for those separated from their loved ones, and in this song, we can see examples of metaphors.

*In this song, the father is away from home, so he used metaphors to say that he’s always with his family. He considered himself as that sunshine, shadow, the whisper in the wind, and an imaginary friend that his family can see around them.

3.  PERSONIFICATION-when you give human qualities and characteristics to an object, an animal, or idea.

-there are things that humans can only do. To create life and motion within inanimate objects, animals, etc. We assign them recognizable human behaviors and emotions.

a. The car danced across the icy road. [We know that cars can’t dance but try to picture a car that is out of control, and you’ll see.]

b. The wind yelled all night long.[This happens on a stormy night. The wind is so strong that it’s so noisy. It reminds you of a wife yelling at her husband non-stop.]

Now let’s take a look at the song “Let it Go” and see how to use personification here.

The wind is howling like this swirling storm inside
Couldn’t keep it in, heaven knows I’ve tried
Don’t let them in, don’t let them see
Be the good girl you always have to be
Conceal, don’t feel, don’t let them know
Well, now they know

4. HYPERBOLE- This speech shows an exaggeration. We use hyperbole to make something seem bigger or more significant. It helps us to express strong emotion, to emphasize a point, or to make things funny.

a. Nakheel tower can touch the clouds. [It means that the tower is very high.

My girlfriend weighs a million pounds. [It means that the girl is too heavy.] -let’s take a look at the song Just the Way You Are by Bruno Mars and check out the lines that express exaggeration.

Just the Way You Are by Bruno Mars

Oh, her eyes, her eyes
Make the stars look like they’re not shinin’
Her hair, her hair
Falls perfectly without her tryin’
She’s so beautiful and I tell her everyday
Yeah, I know, I know
When I compliment her, she won’t believe me
And it’s so, it’s so
Sad to think that she don’t see what I see
But every time she asks me, “Do I look okay?”
I say

Her lips, her lips
I could kiss them all day if she’d let me
Her laugh, her laugh
She hates, but I think it’s so sexy
She’s so beautiful and I tell her everyday
Oh, you know, you know
You know I’d never ask you to change
If perfect’s what you’re searchin’ for, then just stay the same
So don’t even bother askin’ if you look okay

-Men tend to exaggerate when they compliment or when they describe a girl they like. And in this song, you can see how the guy tries to tell the girl that she’s perfect by describing her in an exaggerated way.

5.  Irony- is used to express the opposite of what is someone meant. It is a means to portray a contrast between appearance and reality.

a. A fire station burns down. [This is unexpected because we know that a fire station would be safe from a fire because it’s where firemen stay.]

-You can find many lines from the song that shows irony, and these things sometimes happen in our lives.

An old man turned 98
He won the lottery and died the next day
It’s a black fly in your Chardonnay
It’s a death row pardon two minutes too late
And isn’t it ironic, don’t you think?

It’s like rain on your wedding day
It’s a free ride when you’ve already paid
It’s the good advice that you just didn’t take
And who would’ve thought, it figures

Mr. Play It Safe was afraid to fly
He packed his suitcase and kissed his kids goodbye
He waited his whole damn life to take that flight
And as the plane crashed down, he thought
“Well, isn’t this nice?”
And isn’t it ironic, don’t you think?

A traffic jam when you’re already late
A no-smoking sign on your cigarette break
It’s like ten thousand spoons when all you need is a knife
It’s meeting the man of my dreams
And then meeting his beautiful wife
And isn’t it ironic, don’t you think?
A little too ironic

– This language imitates the natural sounds of a thing. It makes the description of a thing more intense as it adds more reality to it. It helps the reader hear the sound reflected by the word.

a. The buzzing bee flew away.

b. The rustling leaves kept me awake.

In this song, the singer is trying to say that her heartbeat is as loud as a drum, and she uses the word “BOOM, BADOOM” to convey the sound.

7. Alliteration– this language shows the repetition of initial sounds, especially consonants with two or more words or syllables near each other. It does not show a repetition of the same letters, but rather, it focuses on the sound at the beginning of words.

b. I wish I hit his head instead.

Let’s check the song Let It Be by the famous band The Beatles and see how the consonant sound “M, W, TH” is repeated.

8. IDIOM– this is an expression with a meaning that is different from its literal meaning.

a. It’s raining cats and dogs, so don’t go outside. (It means that it’s raining heavily.)

Let’s check some other examples in the song by Katy Perry.

I used to bite my tongue and hold my breath
Scared to rock the boat and make a mess
So I sat quietly, agreed politely
I guess that I forgot I had a choice
I let you push me past the breaking point
I stood for nothing, so I fell for everything

Now I’m floatin’ like a butterfly
Stinging like a bee, I earned my stripes
I went from zero to my own hero

*If you analyze the lyrics, there are hidden meanings on some parts of it.

FIGURATIVE LANGUAGES maybe sometimes hard to use in daily conversations, but I hope this simple blog would help you understand them more and use them in the future.